The Newbury and Thatcham Bahá’ís, in conjunction with the Bahá’í community worldwide, are preparing to celebrate, on 21st October 2017, the two-hundred-year anniversary of the Birth of Bahá’u’lláh, the Founder of the Bahá’í Faith.

In 1890 Professor Edward Granville Brown of Cambridge University was granted an audience with Bahá’u’lláh and this is what he recorded of his first meeting:

“The face of Him on Whom I gazed I can never forget, though I cannot describe it. Those piercing eyes seemed to read one’s very soul; power and authority sat on that ample brow.… No need to ask in whose presence I stood, as I bowed myself before one who is the object of a devotion and love which kings might envy and emperors sigh for in vain.”

With the appearance of Bahá’u’lláh, a new impetus for the unity of the human race has been released into the world and is the next stage in the awakening and progress of humanity.

In the middle of the 19th century, Bahá’u’lláh outlined a framework for the development of a global civilization which takes into account both the spiritual and material dimensions of human life.

“…That all nations should become one in faith and all men as brothers; that the bonds of affection and unity between the sons of men should be strengthened; that diversity of religion should cease, and differences of race be annulled — what harm is there in this? … Yet so it shall be; these fruitless strifes, these ruinous wars shall pass away, and the ‘Most Great Peace’ shall come.… Let not a man glory in this, that he loves his country; let him rather glory in this, that he loves his kind.”

Bahá’u’lláh suffered 40 years of imprisonment, torture and exile for bringing God’s latest message to all the people of the world. Today, His life and mission are becoming increasingly well-known around the world. Millions of people are learning to apply His teachings to their individual and collective lives for the betterment of mankind. 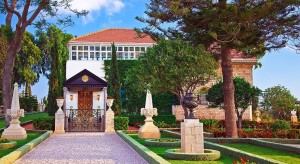 This special celebration in Newbury on the 21st October will consist of a special presentation on the person of Baha’u’llah at 11am and 1pm and a short video screening in Newbury Town Hall. Light refreshment will be served. For more information please contact Sherry Fleming at sherry@tvbahai.org.uk

About the Bahá’í Faith
The Bahá’í Faith is the youngest of the world’s independent monotheistic religions. Founded in Iran in 1844, it now has more than six million adherents in 236 countries and territories.

Bahá’ís come from nearly every national, ethnic and religious background, making the Bahá’í Faith the second most widespread religion in the world. Its founder, Bahá’u’lláh (1817-1892), is regarded by Bahá’ís as the most recent in the line of Messengers of God that stretches back beyond recorded time and that includes Abraham, Moses, Buddha, Krishna, Zoroaster, Christ and Muhammad.

Bahá’ís believe that all humanity was created by one God and we are all part of one human race and that the purpose of life is to know and to love God, to acquire virtues, to promote the oneness of humankind, and to carry forward an ever-advancing civilization.

Bahá’ís practice their religion by praying and reading the scriptures every day, dedicating their lives to service to others, following spiritual and moral principles such as trustworthiness, chastity, honesty, etc., and avoiding gossiping, alcohol, drugs, materialism, and partisan politics. They meet in fellowship to worship and to share news and refreshments every 19 days and during specific holidays.

For more information about the Newbury and Thatcham Bahá’í community and the forthcoming events, please contact Sherry Fleming on 01635 31320 or 0785 414 9536
sherry@tvbahai.org.uk